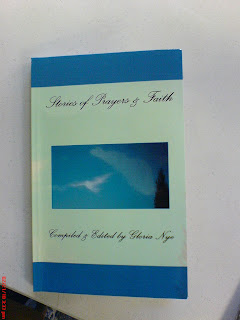 I'm back! Thank you Nancy and Pat for picking up the slack! We had a fun meeting on Sunday, broken up a bit from other meeting going on at the church, but nothing major.

The meeting began with Anita asking if anyone had a spare pen. Harry gallantly gave her one of his then had to borrow one from Nancy - his second one died.

We were joined this weekend by Gloria Nye, our dear friend from Eramosa Eden. Gloria has 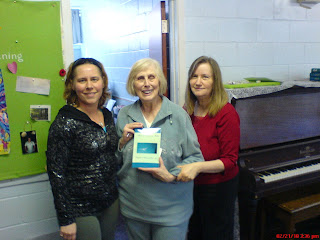 been working hard to edit a new anthology called Stories of Prayer and Faith. She brought along a proof copy for us to check out. This was especially exciting because our own Nancy Rorke and Diane Bator (me) have stories in it and can't wait for it to be released! Nancy read her story about her near death experiences to the group.

Lots of people brought pieces to read. Gloria read a story about John Grisham. Diane read a poem by her uncle Hubert Rondeau from his book Pierced and showed off a book by Alyxandra Harvey called Hearts at Stake. Clare read about students pulling a prank on their teacher in an old schoolhouse.

Ron read an article about Haiti that led to a discussion about the history of Haiti. Clare is working on Meanderings and talked to Jennifer Wells at the Toronto Star for information.

Glenn read a short story edited for the Toronto Star Short Story contest. Thanks to Judy, Nancy, and Pat for their help with it. He was afraid to join the group in case he would lose his writing voice. He didn't lose his voice, we helped make it louder." He will be in Alberta for the next 2 months.

We discussed being true to our characters. Also about how we tend to put parts of ourselves into our writing.

Judy told off her inner critic. She will submit her humourous piece to the Toronto Short story.

Harry's group in Collingwood is trying to bring Shane Koyczen, the poet from the Olympic Opening Ceremonies to the Collingwood Arts Festival Sept 11, 2010. April is National Poetry month. There will be a celebration at the Grey Roots Museum near Owen Sound on April 24, 2010.

Harry's prompts had to do with Spoke Word poetry. Poems that "wriggle us out of our skin." According to Harry poetry is defined as "prose slowed down." Ron surprised us. He has been a poet for years.

Anita has been working hard to become a Minister and is going to Toronto on April 14th for her next stage. The group helps her find her voice and never hesitates to give her support and ideas. She read her poem that she called "Cloud of Unknowing."

Nancy told us she was contacted by a lady looking to bring writers in to Westside Secondary School on Tuesdays to inspire and mentor young writers. Anyone who is interested can contact Nancy.

A reminder of the Brian Henry workshop on March 13, 2010 at the Tweedsmuir Church. If you have not already registered, contact Brian through the Quick Brown Fox newsletter and send him your cheque!

Our next meeting is March 7th. Nancy will be leading.
Bring your pens and be ready to write!
Posted by Diane Bator at 8:03 PM

Thanks Diane. An excellent job as always and I don't have to whine this week!