Writing Prompts from the past 3 meetings:

1. ABCDFEGMNRWY - write a piece using words in sequence beginning with these letters.
2. Repeat as above using letters in reverse order: YWRNMGEFDCBA,.
3. Repeat exercise 1 using the letters from the word HIPPOPOTAMUS.
4. Repeat as in exercise 2 using the letters SUMATOPOPPIH.
5. Use words generated in exercises 1-4 in any order to write a short story. You may throw in words of your own choosing to be creative in this part of the exercise (try to include as many of your words as possible).

1. I don't know how to tell my friend that I'm imaginary.
2. Jim receives a note under the door and is intrigued, especially because it's the closet door.
3. She packed the box carefully.
4. He was great at starting things, but not so good at finishing them.
5. She pushed the cart through the automatic doors and steeled herself for the task ahead.
6. All the world is a stage.

1. Think of one of your favourite possessions. Do one of the following:


2. I never believed in love at first sight until it happened to me.

3. Grace had mixed feelings about going to her high school reunion. She had few happy memories of her teenage years. But she was curious how her classmates had turned out.

4. When I was a kid, I was afraid of the dark. That's when the monsters came out. My dad told me there was no such thing as monsters. "See?" he said, turning off the light. "No monsters." He couldn't see them, even while they were reaching for him. He didn't see them as they followed him down the dark hall. He didn't notice when they turned around and came back toward me.

5. May people dream of exotic holidays, cruising down the Rhine or around the Caribbean, exploring the streets of Rome or Paris, tramping through the Scottish Highlands or the jungles of the Yucatan. Yet if they looked, they would find at their own doorstep sights to attract the most fervent tourist.

Posted by Mary Patricia Bird at 9:29 PM No comments:


I know I haven't posted meeting notes for the past few meetings so I am going to try and summarize what has been discussed at the last few meetings.

We have created a coffee mug of The Headwaters Writers' Guild for promotional purposes. If you are interested in purchasing a mug, we need to order at least 10 of them to keep the price down to $10. We will not order unless we have 10 orders. Pictures of both sides are below: 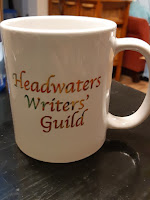 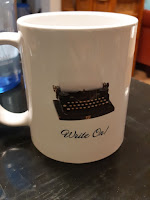 The CBC Short Story Contest deadline is drawing near. The deadline is October 31st. Here is the link: https://www.contestshub.com/cbc-short-story-contest-2019.html

The Caledon Public Library will be accepting submissions from October 1st to October 31st. The link is here: http://caledon.library.on.ca/adult/short/story

THIS SATURDAY, September 28th, 1:00pm to 3:00pm, The Orangeville Public Library as part of their WOW program is holding a Crime Writers Panel. Please come out and support if you can.

The Orangeville Public Library has 3 writing workshops this fall. Marilyn Kleiber will be the instructor for the Saturday, October 5th workshop (10am-2pm). This workshop is called "Building Words: Make your stories possess life and entertain your readers". Please register at the library at www.orangevillelibrary.ca.

Two more workshops take place on Saturday, November 9th, 10am-2pm, "Self-publishing: Difficult to find a publisher to accept your manuscript? Learn how to do it yourself - professionally." And the third on Sunday, November 24th, 1:30pm to 3:30pm, "Writing is a Contact Sport: Good writing doesn't happen in isolation. A writer needs to get out and explore and connect with themselves, the world and the things we can't always see."

As we continue to work on producing our new anthology, discussion was brought up about possibly creating a writing prompt book with space for writing, and possibly producing a new one every year. It was decided that we would focus on our current project and reconsider another book next year.

Prompts from the past 3 meetings will be in a separate post.


Posted by Mary Patricia Bird at 9:12 PM No comments:

Ok. Just sending out a feeler here. If I were to organize a 12-hour write-a-thon for charity in the late spring of next year (details to be determined and announced), how many of you would be interested in participating? Please email me at harryposner@rogers.com, if you're intrigued and excited by the idea. Cheers, all!
Posted by harry posner at 6:29 AM 1 comment: