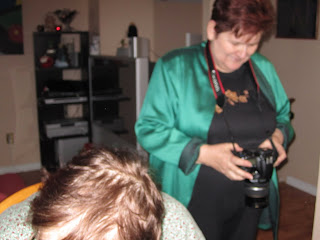 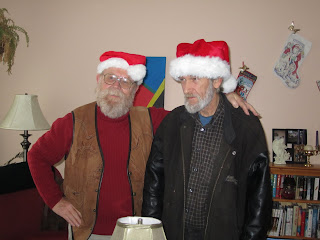 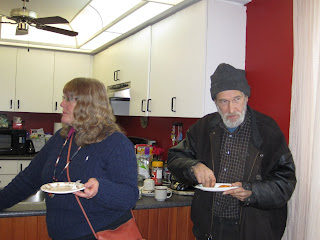 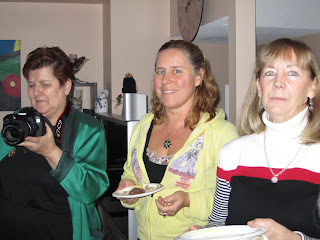 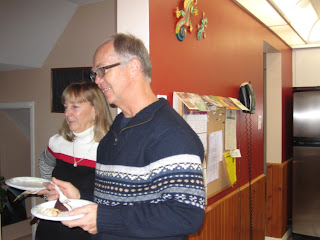 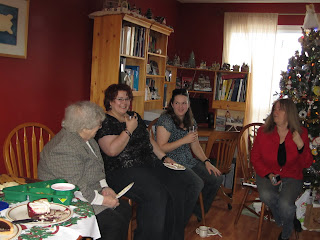 I'll be darned if I know how to sort these pictures and put captions on them, but here they are. Many thanks to Diane for opening up her home to us.

Posted by Mary Patricia Bird at 11:42 PM No comments:

A Walk In Fields of Gold - An Anthology of Prose & Poetry is now available at BookLore in Orangeville and at Amazon.com here: http://www.amazon.com/Walk-Fields-Gold-Anthology-Poetry/dp/0968198198/ref=sr_1_1?ie=UTF8&s=books&qid=1292898926&sr=1-1. Get yours now for $14.95. Proceeds are going to purchase books for the Headwaters Healthcare Centre children's wing.

The book contains the writing works of:

Get your copy today!
Posted by Mary Patricia Bird at 8:36 PM No comments:

Email ThisBlogThis!Share to TwitterShare to FacebookShare to Pinterest
Labels: A Walk in Fields of Gold, Anthology

Thank you to everyone who made the Christmas Luncheon so memorable this year! And for all of the decadent treats you all brought. It was a wonderful afternoon and we'll have to share pictures soon.
Merry Christmas to Everyone!

Diane
Posted by Diane Bator at 9:16 PM No comments:

A BLIP IN THE SCHEME OF THINGS 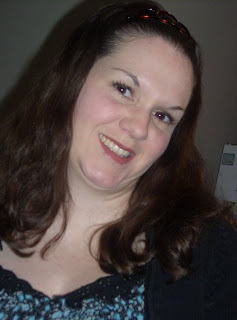 Hello, My name is Kelli Curtis, I'm a published children's author, I'm 34 years old, I've lived in Dufferin County all my life (with the exception of college) and I'm a member of the Headwaters Writers' Guild. At the beginning of this year, 2010, my life changed and although it's a small blip in the scheme of things (one hopes), the reality and the utter frustration of it all sometimes gets to me. I wrote a blog about it and I will admit that I've felt a huge release of tension for doing so. Though I am still frustrated and scared about what's happened and where the future will take me, maybe by sharing my experiences, I can inspire someone else or at least let someone else know that they aren't alone.
Please follow this link and read my latest blog entry about my experiences and frustrations w/having seizures.
http://kelli-curtis.blogspot.com/2010/12/blip-in-scheme-of-things.html
Posted by na at 7:20 PM No comments:

I've taken up the challenge.

You're turn!
Posted by Anonymous at 1:13 PM No comments:

This is the last time I'm posting meeting minutes for 2010. It brings a tear to my eye to think I'll have to wait a whole month to get to do this again.

Our last meeting of the year was a very small gathering of 6 writers. Some of the notable things that were mentioned were:
1) Sandy Diedrich hopes to come back in the New Year. Her brother died and she's been having a hard time dealing with the loss. We all send hugs and prayers her way.
2) Harry has a new job and has to work most Sundays. We're already missing him!
3) Glenn is moving to Cochrane, Alberta. We are even more amazed that he now has a laptop!
4) Ashley finished her 50,000 words and is a NaNoWriMo survivor. Way to go!
5) Ron sent a message to Anne-Marie MacDonald asking her to come talk to us in 2011. He'll keep us informed.
6) Ron also talked to a lady he knows named Ellen who offered to edit his book when it's done.
7) Clare mentioned that we are also acquainted with Kathryn Dean who led an editing workshop for the group in Feb/March 2009 at Meridian.

Pat read us a few Haikus that she's been working on. For those out of the loop, Haikus are short poems where the first line has 5 syllables, the second line has 7 and the third has 5.
She told us the easiest way for her to write poetry is to write it as prose then take out the unnecessary words. She also brought up an exercise where writers write their lives in 6 words only. We all thought that would be an interesting assignment for either the Christmas Luncheon or a future meeting.

Ron talked about an assignment in his English class where he had to write a story then take out the extra words as well. You have to know which words to cut and which to leave that propel the story forward. His teacher said he wasn't a student, he was an "academic."
Ashley reminded us about the book Sin and Syntax that she brought before. It has interesting examples of decreasing your wordiness.

Ashley read another article from writing.com that talked about opening with dialogue as well as good dialogue. Good dialogue should sound natural. Casual conversations in a novel are not interesting to a reader and should be used sparingly. Profanity is the last resort of "little" minds. Show don't tell. Consider the character's socio-economic background when creating his dialogue.

Diane read a story about a baker and brought fresh gingerbread cookies. That'll teach you all for not showing up! LOL

Ron asked if anyone had ever gotten their mouths washed out with soap as a kid.

Clare read a story written from one of Richard's Halloween prompts about the severed hand clutching a rose. It was created using characters he saw on his trip to France.

Sorry, no prompts today. Clare had storyboards for us instead - large sheets of heavy paper with 6-7 photographs from his trip. There were some interesting ideas that came from them. They prompted discussions about Oscar Wilde's The Happy Prince. And Clare to ask: What if you called God and got an answering machine? Ellen Degeneres, Bob Newhart and Tim Conway have done comedy routines regarding that question but we might save it for a prompt sometime. Like January. When I lead.

To wind up the meeting, Diane read a few pieces from The World's Shortest Stories an anthology of stories that are only 55 words long.

So, dear readers, if you would like a challenge, SUM UP YOUR LIFE IN 6 WORDS.
And have a MERRY CHRISTMAS and all the best for 2011!

And keep on Writing!
Posted by Diane Bator at 11:16 AM No comments: