I wrote following from a prompt at last week's meeting (previous post). I had been urged that morning to write a story about this band I have become familiar with through live streaming. They have read the story and have given it high praise, including 90% accuracy in the story. They have given me the okay to post it here and are also posting it on their website TheStillwinter.org.

“It’s a pretty rundown old house,” said Ian as they wandered through the rental unit in a Southern California neighborhood.
“But it’s cheap,” said Richie.
They were two members of a band who thought living together would make life easier.
“It’s three bedrooms. Obviously Gabby and Verenna can move in with us.”
“Still, a third bedroom,” added Ian. “We need more people to help pay the rent.
“Zoro is always couch surfing. He could join us.”
Ian stood in the living room looking around thoughtfully. “I guess it will do if we can come up with the money.”
“There is a basement. A great place to practice.” Richie led the way through a door and down stairs.
“Yeah,” Ian agreed as he looked around at the sparsely finished room with wood panelling and old quilted carpeting. “This would work.”
“Hello?” came a female voice from above.
“We’re down here,” Ian called out.
Gabby and Verenna, Ian and Richie’s respective girlfriends, made their way down to the proverbial rec room.
“What do you think?” Richie asked.
“I’m glad I’m not a member of the band and don’t ever have to come down here,” said Gabby.
“What do you mean? This is a cool spot,” Richie gave her a puzzled look.
“Cool is right,” Gabby agreed as she pulled her sleeves down over her hands. “Is there any heating down here?”
Richie and Ian looked at each other. “It’s not cold down here, Gabs,” Ian said.
“In fact it’s hot and stuffy,” Richie added.
Ian went over to his girlfriend and put an arm around her. “You’re shivering, girl. You sure you’re not coming down with something?”
“I find it a little chilly too,” Verenna added hugging herself.
Richie rolled his eyes. “I guess it’s a good thing you’re not a member of the band either.”
Verenna gave Gabby a sideways glance.
“We went through the rest of the house,” Gabby said. “It’s fine, great, cheap. I could live here. But I’m not coming down into this basement – ever.”
“Me neither,” Verenna agreed.
Ian and Richie looked at each other puzzled, then back at the girls.
“The basement suits our purposes for band rehearsal,” Ian said.
“Good. Fine. Whatever.” Gabby started back up the stairs. Verenna was close behind her.
“There’s more to this than it just being chilly, which it is not,” said Ian. “What’s going on Gabby?”
She stopped half-way up the stairs and peered down at them. “The truth?”
Richie and Ian nodded.


“I swear I see ghosts everywhere down here. Good luck with rehearsals.” She rushed up the stairs with Verenna close behind her.


Harry Posner, as Poet Laureate for Dufferin County, is organizing a Poetry Day on Broadway in May on the heels of the opening of the Saturday Farmer's Market. Details will follow soon.

Patricia will be meeting with Lauren, Events Coordinator at Orangeville Public Library, regarding what events we can participate in with the library for the coming year. We all agree that Open Mic was a big success and worth doing again.

Zen in the Art of Writing by Ray Bradbury

The Internet is a big distraction.

Your intuition knows how to write, so get out of the way.

As always, you are encouraged to share your writing here.

Posted by Mary Patricia Bird at 1:06 PM No comments:


Marilyn presented two new novels she has published: Lavinia by Marilyn Temmer, and We Drank Wine by Marion Reidel, which are available for purchase at Amazon. 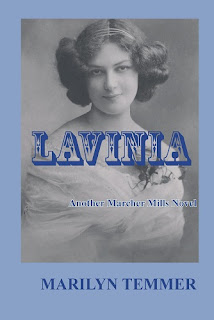 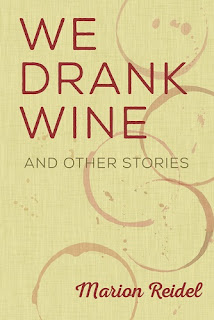 As it is a new year, Patricia suggested we go around the table and indicate what goals each have set for themselves for the coming year.

The prompts were in the form of the Storymatic cards. Because the discussion took up a good deal of time, we wrote but did not read what we wrote. For those in attendance, they have something to read at the next meeting. Please feel free to share your writing on the blog.

Posted by Mary Patricia Bird at 3:44 PM No comments: 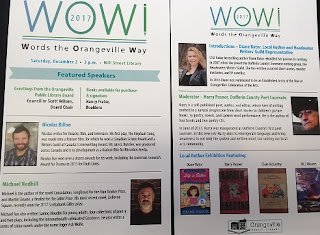 Harry Posner, Dufferin County's first Poet Laureate and member of the Headwaters Writer's Guild, hosted the event with a special introduction by HWG member and USA Today bestselling author Diane Bator. Diane spoke about her experience with the Headwaters Writers' Guild and how the group has helped her to publish several novels. She went on to introduce our two guest authors Nicolas Billon and Michael Redhill. A panel discussion then took place moderated by Harry Posner followed by an audience Q&A. 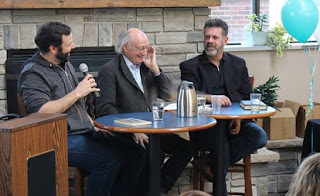 Nicolas Billon: Reading. A question from something I have read.

Michael Redhill: My muse is spending time in a room and just waiting until something catches.

N.B.: I Write from 9-6. I try not to write outside these hours but sometimes the brain doesn't turn off. I don't always do an outline.

M.R.: Writing process consists of peaks and valleys. I respond when it is flowing in the right direction. Writing accrues in layers. In comparison to sculpting - Michelangelo chipped away at the rock until David appeared.

M.R.: Seek out a local writing group like the Headwaters Writers' Guild.

N.B.: Your mother is a good person to sell your writing to. She will always read it. She will always buy it. Have patience. Everyone's first draft is shit. You will be writing and rewriting.

On Books & Bookstores being killed by E-books

M.R.: I think they are bouncing back now. There is a lot of pleasure to be had by the physical object. I'm not that worried.

N.B.: I'm not that worried either. We've been talking about the death of books for about a decade.

M.R.: There are more people reading poetry more than ever.

Speaking About Their Books

Nicolas Billon: Butcher is currently in development for a future film. Can't say much without giving anything away.

The language spoken in Butcher is Levinian which does not exist. In Greek tragedies violence never occurs on stage. In order to hide the violence when someone is describing the violence he needed to use a language no one can understand.

The conflict is invented though the Balkan Wars and Rwanda Genocide are alluded to.

"You can have justice or you can have peace but you can't have both." - Martin Luther King, Jr.

Butcher seeks out whether that quote is true. Revenge is easy to understand. We have all felt it. Justice is more abstract. Your identity can be tied up in an emotion or a drive. The idea of identity and complexity of idea is woven throughout the play.

I cannot predict an audience and their reaction. If the audience walks away with questions I think that is a good thing.

Harry Posner: When you are writing a play do you think along the lines that it would be turned into a film?

N.B.: No. I feel if a play is adapted into a film I feel it has failed. Rewriting for a film is beginning from scratch.

Nicolas Billon went on to read from "Greenland" from the Fault Lines series.

Harry Posner to Michael Redhill: What does the Giller mean for a writer? (Michael Redhill having very recently won the 2017 Soctiabank Giller prize).

M.R.: I don't know yet. It was only 2 weeks ago. It doesn't seem real yet. I was stunned when my name was called. It was weird.

M.R.: A woman hears she has a doppelganger hanging around Toronto's Kensington Market, a place of many sub-cultures. (On where the idea came from): I just sat in the park watching the people and wondered what it would be like for me to see "me" walk into the park. The book is about a woman who walks out and sees someone sucking up her reality.

Harry Posner: What was your process?

M.R.: I don't work with outlines. I would be stymied by sticking to the path. I wasn't sure where this book was going to end up. I knew there had to be confrontation between these two characters.

Harry: Did you know it would affect the reader?

Harry:  The book moves around between multiple genres.

M.R.: Keeping the reader wrong-footed was what I had in mind.

Harry: What was the most challenging aspect of writing the book?

M.R.: I started writing it in 2010. I wrote a book I wanted to read. I wanted it to be strange and difficult. This is the first book in a triptic. The next book is called "Modern Ghosts".

Michael Redhill went on to read from "Modern Ghosts".

M.R.: I wrote the first one, put it in a drawer. While writing the second one I heard the first one calling me.

BookLore had the authors' books on hand for purchase and the authors took the time to meet and sign books.

The Headwaters Writers' Guild and M.J. Moores had a table set up of their books for sale. 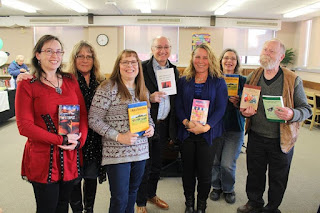 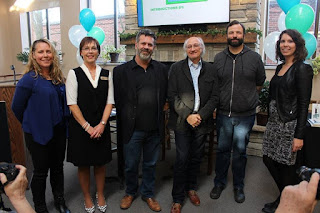 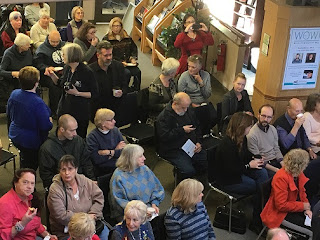 A huge crowd was on hand.

Another successful author event held by The Orangeville Public Library. The Headwaters Writers' Guild was honoured to be a part of it and look forward to next year's event.

Posted by Mary Patricia Bird at 3:02 PM No comments: