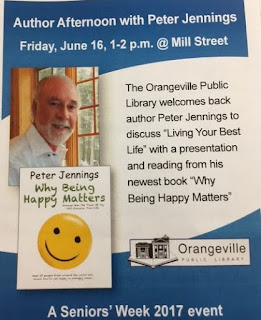 I don't know if I qualify as a senior but I will try to attend this event at the Orangeville Public Library. It looks good.

2. Catching the wrong bus, she found herself in an area of town where...

4. Finding the abandoned cabin was an accident, but now she found herself in the middle of ...

5. After the accident, he couldn't connect with anyone or anything until the _________ came into his life.

6. His brother's laptop sat open on the desk, with a strange looking cryptic code racing across the screen.

7. The clairvoyant cautioned her against staying in the house any longer.

8. The crystal she had purchased at a stall at a market woke her in the middle of the night emitting an eerie glow.

12. If you were part of a dying race after a nuclear war and could leave a letter behind to those who would some day learn from you and your civilization's failure, what would that letter contain?

Next Meeting is Sunday, June 11, 2017
Sonja is scheduled to lead.
Posted by Mary Patricia Bird at 2:12 PM No comments: