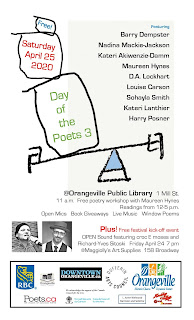 Diane's 10th book is coming out! A book launch is being scheduled at BookLore in October. Stay tuned.

Diane participated in Tottenham Crime Writers of Canada Author Showcase and Panel on March 7th. Her review on that is posted below.

Sonja sent a proposal to the library regarding two events - Reader Feedback and a NaNoWriMo Write-in. The group agreed the reader feedback event should be scheduled for September 26th from 2-4pm, This has since been confirmed by the Library. We need ideas for catchy names for both of these events.

Last year, with seven published novels under my belt, I finally joined the Crime Writers of Canada. I was part of our Crime Writers Event in Orangeville last fall on September 28, 2019. I was nervous meeting such talented writers but came away inspired.
Then again on March 7, 2020, I attended my second CWC author event and I totally enjoyed it! This time, I was more relaxed and felt more like I belonged among such talented company, especially since I’d been on the Orangeville panel with Judy Penz Sheluk and Anita Arvast in September.
Eleven authors (6 women and 5 men) met at the Tottenham Community Centre and spoke to a small, but attentive audience about our process as well as answering a few questions from our wonderful host librarian, Kim Burgess. I found it intriguing that out of all eleven of us, only one professed to being a true plotter, aside from the non-fiction crime writers.
The highlight for me was getting to mingle and talk to fellow authors later. We exchanged stories about other events, how we come up with ideas for books, what we do to promote our books, and even what printer we use to get hard copies.

Anita Arvast – Dr. Arvast is a professor of humanities and writes books in the true crime genre with an orientation to social justice. Her first book, Bloody Justice, was short-listed for the Arthur Ellis Award. Her subsequent book, What Killed Jane Creba, is being turned into a play.
http://www.anitaarvast.ca/

David Albertyn – Born in South Africa, David Albertyn immigrated to Toronto in 1993. Writing stories since the age of six, a graduate of Queen’s University and the Humber School for Writers, David’s goal is to write visceral novels that are both thrilling and meaningful. He has coached tennis since 2005. https://davidalbertyn.com/

Diane Bator – A born writer and storyteller, once Diane Bator started writing, she’s never looked back and is the author of several mystery novels. When she’s not writing, she works in a theatre which may be subjected to immortality in a whole new series. She might even try writing a play.
http://penspaintsandpaper.com/index.html

Karen Grose – Karen Grose was born in Canada and lives with her family in Toronto. After a career as a teacher, principal, and superintendent, she turned her attention to writing. Set in Ontario, The Dime Box is her debut novel and she is currently working on a second. https://karengrose.ca/

Jim McDonald – Jim McDonald is a teacher, marriage officiant, DJ, actor, publisher and author. Jim is close to completing Heavy Weather, a historical thriller that follows the 1970 guerilla actions of Weather Underground, the terror group that bombed draft boards, courts of law and even the Pentagon. http://www.jimmcdonald.ca/

Daniel McTavish – Daniel McTavish has worked in the computer industry for over twenty years, spending thirteen years in North Carolina. He currently lives in Toronto, Ontario, but spends what time he can at his cottage in Norway Bay, Quebec, sharing morning writing sessions with passing porcupines and racoons. https://mctavishpublishing.com/about/

Hyacinthe Miller – An award-winning author, Hyacinthe’s work has been published in anthologies, magazines and online. Her debut novel, Kenora Reinvented, was released in late 2019. Hyacinthe is a founding member and Past President of the Writers’ Community of York Region and a member of numerous Canadian and International professionals writers’ groups.
https://hyacinthemillerbooks.com/

Lorna Poplak – Lorna Poplak is a Toronto-based writer, editor and researcher with a fascination for the stories behind historical events. Her debut book, Drop Dead: A Horrible History of Hanging in Canada, was released in 2017. She is currently working on a second non-fiction book about Toronto’s infamous Don Jail. https://www.lornapoplak.com/

John Simpson – John Simpson was a journalist for many years as well as the author of crime fiction. His first book, Undercut, was runner-up to Kathy Reich’s Deja Dead in the first-novel category of the 1997 Crime Writers of Canada Arthur Ellis Awards. He lives in Barrie.
http://johnworsleysimpson.ca/about-john-worsley-simpson-crime-fiction-writer/

Judy Penz Sheluk – An Amazon International Bestselling Author, Judy Penz Sheluk writes the Marketville and Glass Dolphin Mystery series. Her short stories are included in several collections, including The Best Laid Plans: 21 Stories of Mystery and Suspense, which she also edited. Judy is a member of Sisters in Crime, International Thriller Writers, South Simcoe Arts Council, the Short Mystery Fiction Society, and Crime Writers of Canada, where she serves on the Board of Directors as Vice Chair. She splits her time between Alliston and Goulais River. http://www.judypenzsheluk.com/

Keith Weaver – After a 37-year career in engineering, and more than 50 years into a continuing reading addiction, Keith Weaver turned full time to a long-standing interest, writing. But instead of technical writing, he focuses now on fiction. Eight books later, this very active retirement continues.
http://keithrobertweaver.com/

While I’m still relatively new in the Crime Writers of Canada circle, I’ve found being a part of the group beneficial and am branching out to other groups such as Sisters in Crime as well. I meet new crime writers, learn more about the tax implications of being a writer, and find out more from other authors about their processes. What works for some, doesn’t always work for others.

For now, sharing their work, and mine, is what works for me!

Hi all. Please take note of this event and date, and then contact me to register to take part in order to support an important service organization in our community. Summer is the leanest time of the year for the Food Bank, so here is a chance to top up their resources by doing what we love to do. Get in touch with any questions. Cheers. 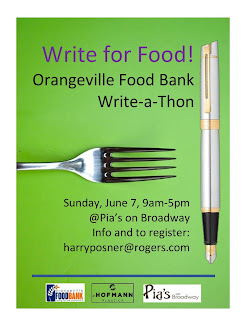 Posted by harry posner at 9:54 AM No comments: