As I had laryngitis at the last meeting, I did not read what I wrote from the prompts in the previous post. This is what I wrote:
~~~~~~~
Dreams or angels. Sometimes they are one in the same. Angels come to me in my dreams giving me messages. Sometimes I recognize these angels as my dad or my brother, or even my cousin, all having passed to the other side. They come to me with messages of guidance or warning.

And some dreams are just dreams, though I know they contain messages. Dreams are a way for your subconscious to work things out during sleep time, a psychiatrist told me. So when I wake up I always analyze what I have dreamed. Sometimes the message is obvious, sometimes it's confusing. I come to my own conclusions in cases like that, which is probably what we're supposed to do.

[A psychic medium told me during a reading later that day that I have a lot of questions but my guides are not going to give me the answers. I need to look within myself for those answers.]

I had a dream recently of my brother's voice - my living brother - saying that I never call. I had responded with "It goes both ways". At first I thought nothing of the dream, but as I told the dream to others it dawned on me that perhaps there was a message there, maybe even a warning.

My eldest brother passed away suddenly at the age of 56. I hadn't seen him in 8 years. I learned afterwards that a month before he had been at an event in my area, an event I was too lazy to go to. A month later he was dead. I know if I had known he would be there I would have made the effort to go.

So now I have this dream about my other brother and can't help but wonder if it is a warning that this could happen again, though I saw him last at Christmas. A warning, or just a message that I shouldn't let my relationship with my living brother slide like it did with my late brother.

This dream occurred a few weeks ago and since translating its possible message, I still haven't called him. But I will, because one never knows when our loved ones here will be taken from us and become our angels over there.

[I texted him a few minutes ago asking him to call me.]


Posted by Mary Patricia Bird at 3:28 PM No comments:


Quotes and prompts provided by Nancy.

If you want to write, you must begin by beginning, finish by finishing. This is the great secret of it all. Tell no one. - Jack Heffron, The Writer's Idea Book

If you can visualize it, you can do it.

Keep a dream journal. Many writers (Anne Rice, Steven King) get their ideas from their dreams.

1. Have you ever had an out of body experience, seen a ghost, been saved by an angel? How did it change you? If not, write about what it might be like.

2. A mysterious tablet with hieroglyphic figures had been dropped by the fleeing men.

3. Use this sentence somewhere in a short story:  Now that she is gone I was finally free to tell the truth.

4. I am thankful that God never answered my prayer.

5. Describe a dream (maybe a recurring dream) which affected you deeply.

Next Meeting September 10, 2017
Judy is scheduled to lead.

Posted by Mary Patricia Bird at 2:34 PM No comments:

Writing Prompt: The Person I Would Most Like to Bring Back

The person I would most like to bring back is my dad. Though I do have many visits from him in sleep time, I long to hear his voice, his laugh, to feel his comfortable embrace.

I never got to ask him questions. I heard stories from when he was a kid, but only a chosen few he repeated over and over again.

My father's father was born in England. When his parents and 13 or so siblings emigrated to Canada, Charles remained behind. At the age of 16 he lied about his age and entered the military. He was stationed in India where he met my grandmother, also from the U.K. whose father was stationed in India. My grandparents wed there (and I actually found their marriage certificate online). They had three children, then emigrated to Canada when my dad was a year old. They had one more child here.

I asked my mother recently if my grandparents had British accents. I never met them and was curious as this was never mentioned. My mother having dementia said she didn't know. I'm sure if she thought about it, maybe thought about a conversation they had, she would be able to recall.

A small thing, that, but something I never thought to ask my father. I have pictures of my grandparents and a general idea of their characters, but not much. They never seemed to smile and I know my sister was afraid of my grandmother.

My father had a wonderful sense of humour. He always teased his sisters, always got into trouble. "Madge," my grandfather said one night at the dinner table, "we are raising a fool." (I think it was fool, it could have been clown. I heard the story many times but my mother doesn't remember).

So not only would I like to see, feel, and hear my father again for the mere comfort of being in his presence again, I am sure he has many stories to tell that I want to hear.

I visited my mother recently and tried to reminisce about Dad.

"Where did you meet?" I asked knowing the answer.

I reminded her of the story Dad had told. "You were in a park, on a swing. He said he even remembered what you were wearing."

The story of my Mom and Dad walking together, eating ice cream as they crossed the bridge over the Avon River in Stratford is so vivid as my father told it a million times. It's as if I was there.

They toyed with each other, each holding a hand out to the other. "Come here." "No, you come here." My Dad held my mother's hand, but then let go. My mother toppled over the railing into the water. When she came out dripping wet my father was howling with laughter.

I can hear that laugh. My father laughed a lot and brought a lot of laughter into our lives. I could use some of that laughter today and every day. But the laughter only my father could create. And I would love to be able to hear him howl with laughter at something I said. Mostly my jokes, when he was alive, would elicit a look of surprise. Today, I would hope, that I could make him howl with laughter. Laughter we could share together... and then a hug. 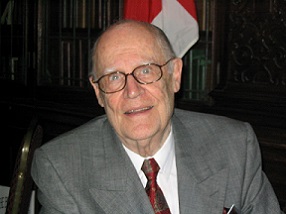