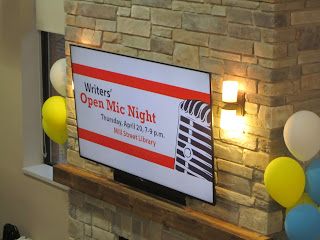 The Headwaters Writers' Guild in partnership with the Orangeville Public Library held a Writers' Open Mic Night on Thursday evening. The evening was a huge success as you can see by this photo: 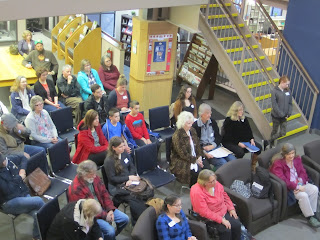 Our esteemed host, Spoken Word Poet and author of 4 published books, Harry Posner opened the evening with a poem he wrote, "From the Crotch of the Invisible World", a rant about the electronic world. Many thanks to Harry for being Mr. Personality. 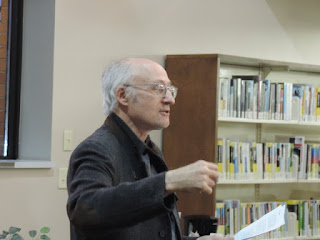 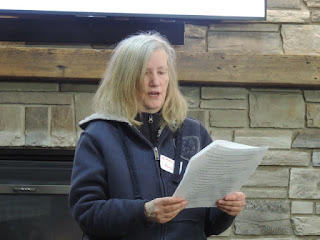 First up was HWG member Donald Bowles who read from his current work in progress. 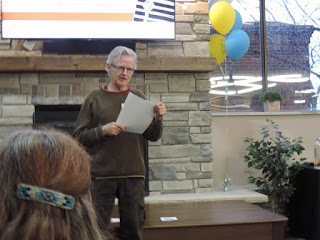 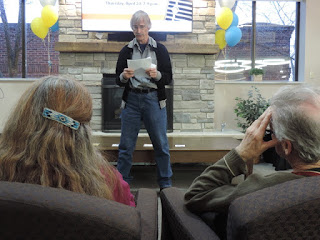 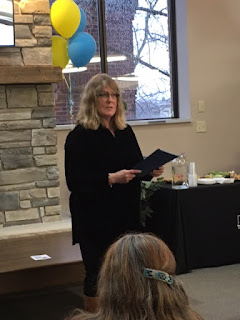 Okssana Crawley made the drive from Brampton to share her series of children's books called "Super Hammy", a box set of 15 teachables which she also illustrated. 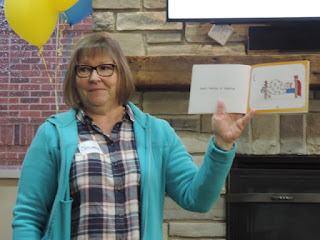 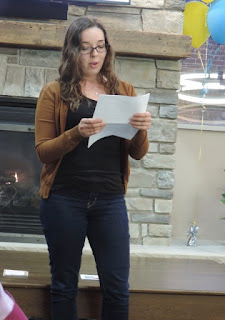 A brave 14 year old, Vanian, was introduced with her quote, "I used to be a liar but became a writer instead." She read two poems, "Heartbroken" and "Half-Brother". 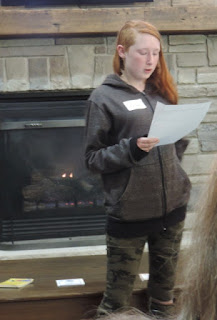 Our feature reader, U.S.A. Today best selling author and HWG member Diane Bator closed out the first half with a reading from the second novel in her Gilda Wright Mysteries series of novels. 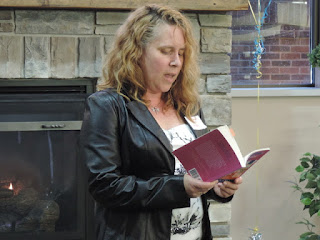 HWG member and Banner columnist Clare McCarthy started the second half of the evening reading a short story he wrote from a group writing prompt. The prompt was "He tied a rope to the bag and lowered it carefully from the second floor window at the back of the old house". The title of the story, "It's In The Bag". 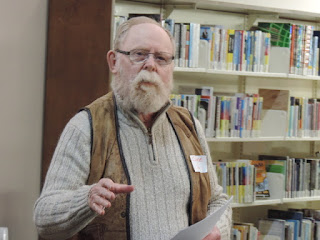 Emma Pink read from her newly published book "It's Going to Be a Really Good Day" about her struggles with bi-polar disorder. 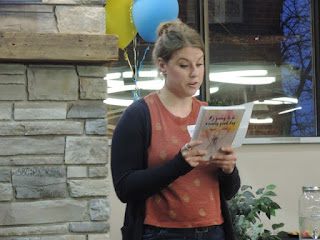 We were then blessed with a second reading from feature author Diane Bator, this time from her yet-to-be-published novel "Steeped in Trouble". This will be Diane's 10th published novel (if I haven't lost count).

Following Diane was Matt Griffin from Collingwood. Matt's writing is a little on the eccentric side. I can only describe his performance as humorous, along the lines of stand-up comedy. 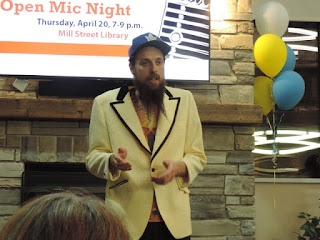 Winston Uytenbogaart read a collection of poems he wrote. This was his first performance and he did great. He read two poems entitled "When I Was Young", "Leonard 11/10/16" in honor of the late Leonard Cohen, "The Red, Red Rose", "Good-Bye Old Molar", "The Festival Roadie Blues", "The Farmer", and "Leo's Song" in honor of his late brother. 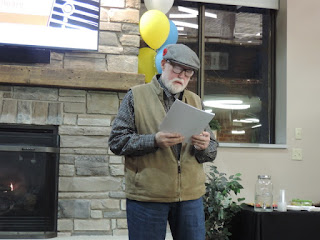 M.J. Moores has published a series of novels called The Chronicles of Xannia. She delighted us with her beautiful singing voice in a-capella before reading from "Cadence of Consequences". You can check out her website at mjmoores.com. 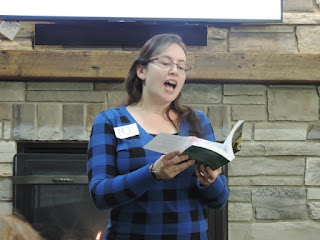 Nancy Rorke returned to the floor to read a short story on her experience surrounding learning to ride a motorcycle.

Our final performance of the night was from former HWG member Jenn Crole who we hope will be returning to the group. She read a poem she wrote called "The Awakening". 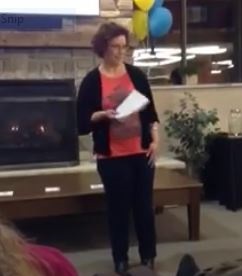 We would like to thank the Orangeville Public Library for co-hosting this event with us and for providing delicious cookies, fruit and beverages. Added props go out to group Administrator, Patricia Gallant (aka Mary Patricia Bird), pictured here with Diane Bator. She, Harry and Nancy worked hard with the Orangeville Public Library to put this event together. And thanks to Judy Zarowny for providing photography. 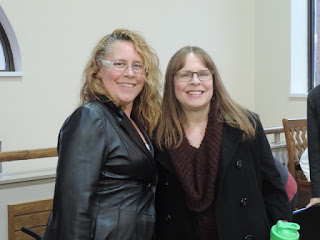 Thank you everyone who came out to support our writers. We hope to see you at the next Open Mic event. Stay tuned.

Steeped in Trouble will be my 7th published novel, but there are at least another three waiting in the wings!
Thank you Pat for posting this. You, Nancy & Harry did an amazing job!